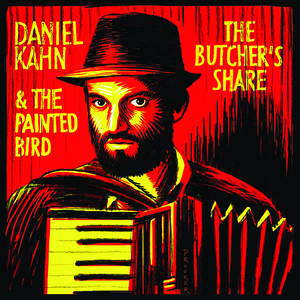 A Detroit area native, Daniel Kahn attended the University of Michigan where he ...

Freedom Is A Verb: Daniel Kahn & The Painted Bird Return to the US with Radical Yiddish History and Nightmarish Visions You Can Dance to.

With a new record, The Butcher's Share, The Painted Bird Berlin's radical Yiddish borderland bandits return to the road. “We like to say we’re singing apocalyptic anthems for the revolution,” quips Kahn, “or perhaps they are revolutionary anthems for the apocalypse. That tension gets to the heart of the matter. It’s not one or the other, and it’s not exactly both.” Imbued with the passion of early 20th-century Eastern European radicals, the poetics of the best modern songwriters, and the live energy of a punkrock shtetl wedding, The Painted Bird translates the struggle, hope, and intensity of the past into our own time. The band is touring Europe and North America throughout 2018.

Berlin-based Detroit-born poet / translator / singer / multi-instrumentalist (accordion, piano, guitar) Daniel Kahn has reformed the band with new and old comrades: Berlin’s clarinet/sax/brass master Christian Dawid, New York's leading Eastern European fiddle virtuoso Jake Shulman-Ment, experimental contrabassist composer Michael Tuttle, and neo-klezmerist drummer Hampus Melin. The live show features translations, lyrics, and images by Eric Drooker, an iconic artist for the punk movement, whose work is woven into the album’s design. “The visuals are a kind of translation, too,” notes Kahn. “They are there to enrich the experience.” The artwork and supertitles, as well as material from the band’s new videos, are all curated and projected by Berlin-based translator, and Kahn's wife and partner, Yeva Lapsker, who runs the program live, using images as a kind of visual instrument in the band, shifting the presentation to suit the set.

“Yiddish culture is a global culture. And we’re fighting the same fights as many of the thinkers and artists and activists of the early 20th century,” Kahn argues. “It’s not the past repeating, however, and we have their language and their experience to draw on as we make the connection to the struggles of immigrants, Muslims, refugees, Jews, women, all people who are fighting to live freely. The past is present and the struggle is global and historical.” Complex historical and political connections aside, The Painted Bird remains rooted in traditional singer-songwriter ballads and rocking energy, in expressive musicianship and the connection with the audience. “We start at the bottom of the pit and crawl out, to the really uplifting songs. ” notes Kahn. “We sculpt our set to have a dramatic arc. Every show is a new relationship with strangers.”

New anthems like "Freedom Is A Verb" and Josh Waletzky's “99%" speak to the political moment as much as they address eternal struggles of class and liberation. Ballads like "Children In The Woods" and "Sheyres Hora" explore the depths of trauma and Traum. The dark rock landscape of "No One Survives" references the brave hopelessness of late David Bowie. In the title track "The Bucher's Sher" Kahn manages to make an upbeat Klezmer epic out of economic concepts of commodity fetishism and bourgeois morality. Old Yiddish, Russian, and German ballads of resistance and revolt are made more radical and relevant through poetic new translations.

Daniel Kahn & The Painted Bird continue to masterfully navigate the dichotomy between the revolutionary and the apocalyptic, the political and the poetic, the corrosive and the explosive.